Tolerance is CERTAINLY NOT ONLY a Conservative Value

Today, I want to a recent video Dave Rubin made for PragerU, titled Tolerance is a Conservative Value, a video that I am quite disappointed in. The title itself already looks suspicious: tolerance is a classical liberal value, and in the modern West, it should be a universally shared value of progressives and conservatives alike. Indeed, Rubin gets it right when he says in the video that America itself was built on tolerance. Rubin's angle seems to be that, in the America of 2019, only the right is still tolerant of diversity of thought, because the left has become totally intolerant. I guess that, from here, one could claim that tolerance has therefore become a conservative value.

However, this view is not only factually wrong, but also dangerous for the future of liberty and Western civilization itself. Let me explain. Firstly, while I agree that, on average, the left is less tolerant of diversity of thought compared with the right, this aggregate measure is in large part skewed by the fact that a small minority faction in the left has become very intolerant, due to the strong influence of critical theory and the conflict theory of sociology. However, the rest of the left remains quite tolerant, as Rubin should have found when he was interviewing people like Bret Weinstein, Andrew Yang, Tulsi Gabbard and Marianne Williamson. To say that the left as a whole is intolerant would be an injustice to these great people and many others. Moreover, to claim that the whole of the right is tolerant would also be inaccurate, as right-wing rejection of classical liberal values is alive and well, as evidenced by thinkers like Sohrab Ahmari and Patrick Deneen.

Furthermore, to claim the value of tolerance solely for the right is to contribute to the elite-led attempt to polarize society, which also plays into the conflict theory of sociology. As history tells us, a polarized society inevitably leads to tribal thinking, and such a society is by definition inhospitable to individual liberty. Right now, Western society is not yet polarized, but there are top-down attempts to make it so. The success of the Yang and Gabbard campaigns have demonstrated that ordinary people are in fact not politically polarized yet. But certain elites on both sides of politics continue to promote the narrative of polarization, in order to create this polarization, which would benefit their agenda in one way or another. For media elites on both the mainstream right and the mainstream left, polarization would mean more loyal audiences and more revenue, healthy political discourse be damned. For those further to the left who subscribe to the conflict theory of sociology, polarization would create the necessary conditions to support a Marxian narrative of society divided between the oppressors and the oppressed, which would be used to justify radical change, including some changes that would trample on individual freedom. In light of this situation, I believe our most important priority as freedom loving people should be to shut down polarization in all its ugly forms, and to encourage the strengthening of the social fabric by bringing people together and emphasizing their commonalities. Sweeping statements like how only conservatives are tolerant and how all progressives are intolerant certainly don't help here.

My point is that, while Rubin has been correct in stating that there is a real threat to classical liberal values, this threat can be minimized by discouraging polarization and strenthening the social fabric. On the other hand, to encourage polarization would be to create the very conditions that would lead to a further erosion of freedom. Therefore, by making a polarizing statement, Rubin has, in my opinion, ironically contributed to the very problem he wants to fight.
By Team Tara - September 26, 2019

Welcome to Moral Libertarian View, a program where we discuss news events that are worth looking at from the point of view of the Moral Libertarian idea, that is, every individual should have Equal and Maximum Moral Agency in their lives. I hope you subscribe if you are interested.

Today, I want to take another look at the ongoing drama surrounding some comments made on Twitter by Natalie Wynn of ContraPoints. I've already responded to the substance of the comment a few days ago, so I won't be looking at that now. What I want to explore is why a few comments from one personality have gotten some parts of the internet so fired up, and what implications this may have for the rest of society. Since we last looked at the issue, the conflict between supporters and critics of Natalie has only gotten worse, and Natalie even disabled her twitter account. Meanwhile, even many normally 'woke' people have looked on in disbelief, commenting along the lines of, 'if ContraPoints is not woke enough for you, then you've really got a problem'.

Many also said something about the 'cancel culture' of the left having gone way too far, which of course, I totally agree. If anything, I think the latest incident shows that the situation for free speech is even worse than just a few years ago. Back in 2016, it used to be more along the lines of cancelling men who questioned contemporary feminism, but today, apparently a trans person talking about something that triggers her own gender dysphoria has also become fair game. But then, I had actually been warning people about this possible development even back then. This escalation is actually inherent in the postmodern and critical theory ideologies that are used to justify restrictions on speech in the first place. Furthermore, if we don't have a serious conversation about it, I can guarantee that it will get even worse.

Basically, the core problem lies in the belief that some speech is harmful, and should not be allowed. This idea is probably influenced by several sources, including the postmodern belief that discourse itself is power and hence capable of oppression, and the general critical theory-inspired view that certain common ideas represent a repressive cultural hegemony of the interests of the dominant classes. Furthermore, some increasingly influential conflict theories of sociology, which are inspired by the Marxian idea of society and history based on class conflict, are often used to justify the repression of unwanted speech by so-called privileged groups. As to who is privileged and what speech is harmful, there really is no clear definition or limit. As I said, back in 2016, it was men with 'male privilege' criticizing feminism; today, it's apparently conventional trans women with so-called 'passing privilege' criticizing the radical practice of 'pronoun consciousness'. In both cases, there's no fair judge of what constitutes harm; those who shout the loudest get to determine what's harmful, and the only justification needed is the identification of some kind of privilege. It's really an endless slippery slope.

The thing is, 'cancel culture' not only leads to a toxic society; it is also inherently against morality itself. According to the Moral Libertarian viewpoint, everyone should have equal and maximum moral agency because nobody is always right, and therefore, nobody should have the definitive moral standing to override another's agency. It logically follows that nobody has the moral standing to judge whether others' speech is harmful, and nobody has the moral standing to limit another's agency on the grounds of 'privilege'. It logically follows that the free speech position is the only consistently moral position. Therefore, from a Moral Libertarian viewpoint, the only morally sound way to counter speech you consider 'harmful' is by arguing against it rationally. At this point, you may argue that those voicing their opposition to certain speech are doing just that. But then, this wouldn't be the case if they clearly aren't interested in participating as equals in the arena of ideas, for example when there are calls for the de-platforming or cancellation of certain individuals. While the latest outrage against Natalie has not reached that level, those participating in the outrage clearly aim at stopping Natalie from saying similar things again, therefore it's more like a de-platforming than a debate in essence. Furthermore, the mass mobilization of outrage to overwhelm the capacity of one individual to respond is also inherently against another important rule in Moral Libertarianism, that where groups should never be allowed to combine their share of agency to overwhelm other individuals, lest there be a tyranny of the majority.

All this may sound like theoretical stuff, but as history has shown us again and again, the violation of Moral Libertarian principles always brings about actual harm. Hyperwoke left-wing circles are increasingly being compared to Stalinist dictatorship with its purging of anti-revolutionaries, and I don't think it's an exaggeration at all. In fact, the limitation of free speech and banning of certain ideas has already harmed society by creating an imbalance in the market of ideas, causing the public conversation to be biased in the direction of those with certain agendas. For several years now, many of us have been worried about what this might mean for dissident academics, critics of intersectional theory, or even non-custodial fathers, for example. Right now, the pronoun conversation is similarly being tilted towards the agenda of a certain brand of postmodern feminism and its goal of deconstructing gender, and against the needs of gender dysphoric trans people, as well as an increasingly confused general public. I fear that this won't end well at all.
By Team Tara - September 06, 2019

From TaraElla Report: Can Andrew Yang Save the World with Human Capitalism Cult of ContraPoints vs Cult of Jordan Peterson On Tulsi Gab... 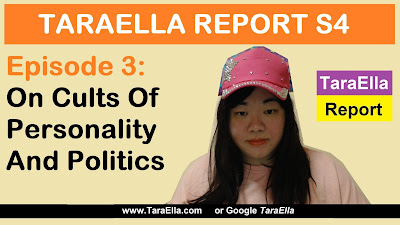